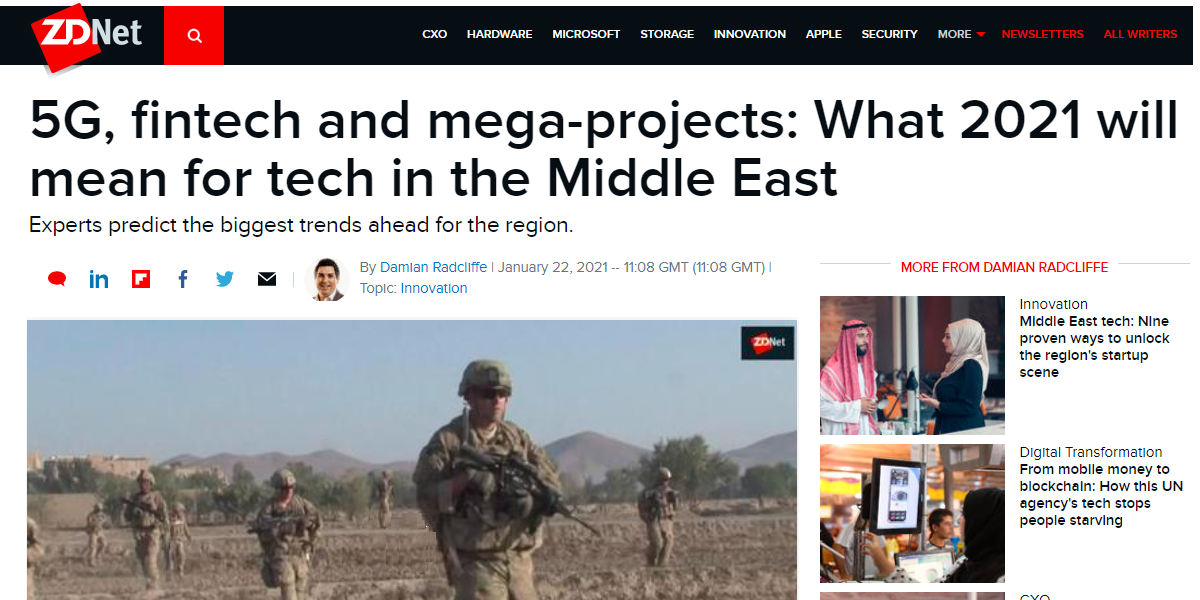 Despite the economic pressures of the past few years and the disruption of the pandemic, there is so much going on in tech in the Middle East at the moment. So, there was no shortage of material for Damian Radcliffe’s annual Middle East technology predictions story in ZDnet, which quoted me and others from the region’s tech ecosystem on a wide variety of trends including 5G, emerging technologies, government investment, startups, smart cities, open data and cybersecurity.

Prior to the pandemic IDC forecast that investments in digital transformation and innovation will account for 30 percent of all IT spending in the Middle East, Turkey, and Africa (META) by 2024, up from 18 percent in 2018. Meanwhile, it has predicted that government enterprise IT spending in META will top $8 billion in 2021.

During the past 12-18 months we have seen significant activity in several key areas of government spending, including digital transformation, creating Government Clouds, introducing open data policies and platforms, digital services and robotics. Then there was the Saudi Data and Artificial Intelligence Authority (SDAIA) announcement of the Kingdom’s National Strategy for Data & AI (NSDAI) in October, revealing plans to raise $20 billion in investment for data and AI initiatives.

My expectation is that some of the government digital platforms and initiatives that have been created over the past 18 months will support the launch of a variety of new initiatives, local and foreign investment, public-private sector partnerships and opportunities for startups during 2021.

You can read Damian’s full article on what 2021 means for tech in the Middle East here. 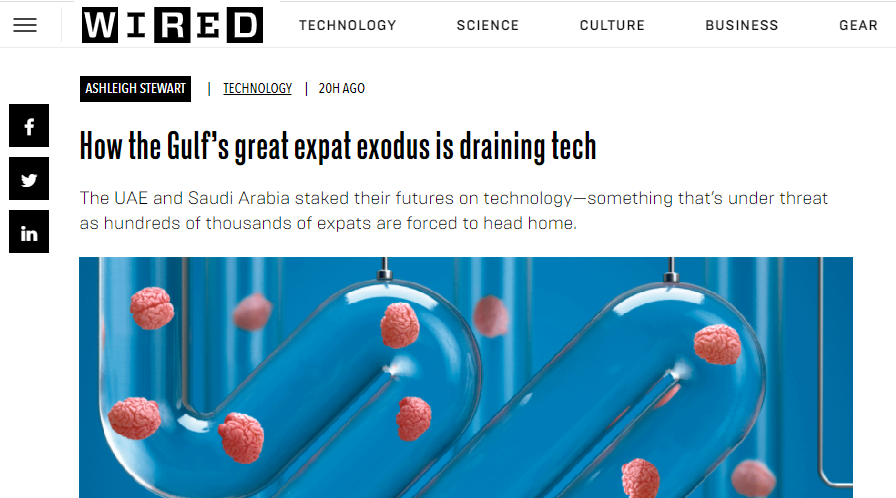 It’s been a bumpy ride for GCC technology ecosystems, with plenty of budget cuts, job losses and, due to the onset of Covid-19, slowing venture capital activity. However, some of the region’s most ambitious government initiatives to-date have been put in place to accelerate innovation, talent and growth in the tech sector. Uptake of some technologies also seems to have spiked since the pandemic.

So, is the region’s tech sector growing or cooling off? It’s an interesting question and, as with many questions like this about industries, there’s no simple answer. WIRED Middle East asked me whether I was optimistic about the future of tech in the region. The short answer is that I am very optimistic, although the tech sector is not without its challenges.

It is true that much of the technology sector has been hit hard by the knock-on effect of lower oil prices on GCC IT spending, increase price competition and the impact of the coronavirus pandemic on decision making, new projects and project spending. Multinationals and regional technology firms have cut budgets, including staffing and other expenses as a result. However, one really has to drill down to specific technologies, solutions and the current technology needs of customers in the region to fully understand what’s going on. All types of technology business are not contracting. In fact, far from it, some tech firms are growing fast and many of those are working with new emerging technologies for automation, data analytics, AI-powered digital services and other disruptive services and solutions.

There are also contradictory trends when looking at the impact of 2020’s turmoil on jobs and the region’s need to compete for the right tech talent. There are three key driving forces here shaping the region’s tech talent pool: 1) global trends creating new tech jobs and decreasing demand for tech jobs that are being obsoleted and/or impacted by automation, 2) the GCC’s belt-tightening of the past few years due to lower oil prices, forcing public and private sectors to be more cost-effective and 3) the unexpected consequences of Covid-19, which include the accelerated demand for some emerging technologies.

Along side the economic ups and downs, and the surprises brought about by the pandemic, there are the heavily funded innovation and technology initiatives that have been put in place by Saudi Arabia and the UAE. For example, the massive open data projects in Saudi Arabia and the UAE, the recently announced $20 billion Saudi National Strategy for Data & AI (NSDAI), Abu Dhabi’s increasing investment in R&D, and numerous smart city and smart city services projects. We’ve also seen an upswing in the numbers of tech startups outside of the popular ecommerce, delivery, travel and transport segments.

However, the one change that I’ve noticed over the past few years, may be the crucial one for the GCC technology ecosystems. I believe that there has been a clear attitudinal change among GCC citizens themselves, that has helped to make technology a more attractive sector for jobs, entrepreneurship and investment. In years past, a traditional career in technology has been a safe government IT job, whereas today locals are joining the tech sector in larger numbers, there is a new generation of tech startups founded by GCC citizens and we’re starting to see more interest in startup venture capital investments from Gulf investors.

Huge, well thought through government tech initiatives, the recent acceleration of demand for emerging technologies and the increasing engagement of GCC nationals in the tech sector are the three top reasons why I believe there has never been a more exciting time for the region’s tech industry. 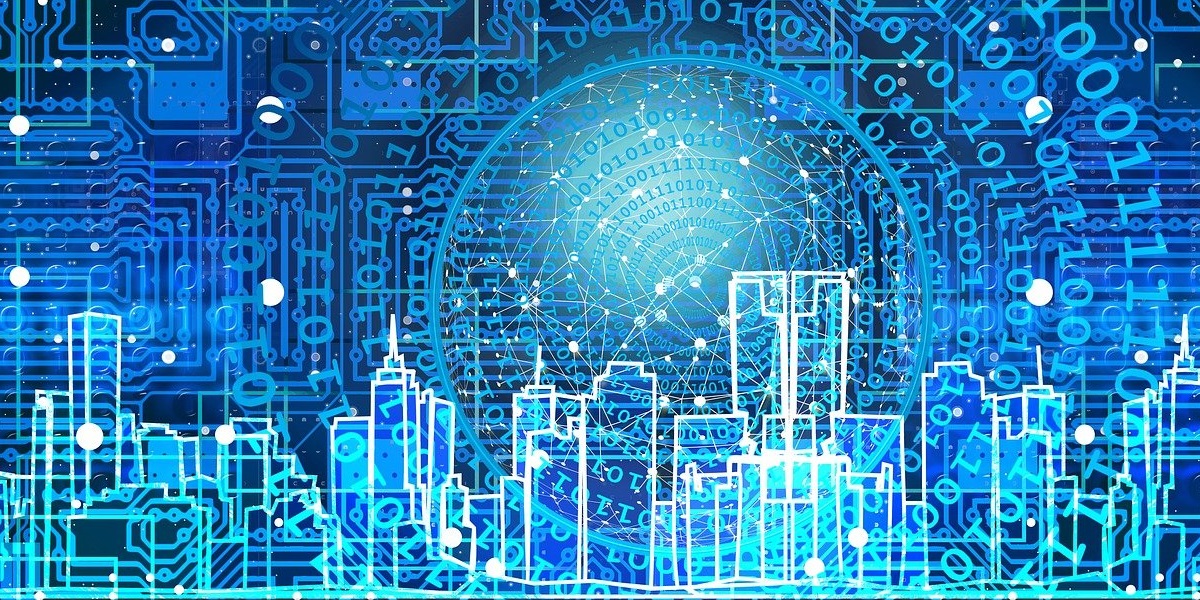 My New Year’s Linkedin poll about changes in how people feel about their ethical concerns regarding AI doesn’t prove much, but it does show that 2020 did little to ease those concerns.

Opinions and our level of understanding about artificial intelligence can vary a great deal from person to person. For example, I consider myself a bit of a technophile and an advocate of many technologies including AI, with a higher than average level of understanding. However, I harbour many concerns about the ethical application, usage and the lack of governance for some AI technologies. My knowledge doesn’t stop me having serious concerns, nor do those concerns stop me from seeing the benefits of technology applied well. I also expect my views on the solutions to ethical issues to differ from others. AI ethics is a complex subject.

So, my intention in running this limited Linkedin poll over the past week (96 people responded) was not to analyse the level of concern that people feel about AI, nor the reasons behind it, but simply whether the widepread media coverage about AI during the pandemic had either heightened or alleviated people’s concerns.

The results of the poll show that few people (9%) felt that their ethical concerns about AI were alleviated during 2020. Meanwhile, a significant proportion (38%) felt that 2020’s media coverage had actually heightened their ethical concerns about AI. We can’t guess the level of concern among the third and largest group – the 53% that voted 2020 ‘hasn’t changed anything’ – however, it’s clear that 2020 media coverage about AI brought no news to alleviate any concerns they might have either.

Media stories about the role of AI technologies in responding to the coronavirus pandemic began to appear early on in 2020, with governments, corporations and NGOs providing examples of where AI was being put to work and how it was benefiting citizens, customers, businesses, health systems, public services and society in general. Surely, this presented a golden opportunity for proponents of AI to build trust in its applications and technologies?

Automation and AI chat bots allowed private and public sector services, including healthcare systems, to handle customer needs as live person-to-person communications became more difficult to ensure. Meanwhile, credit was given to AI for helping to speed up data analysis, research and development to find new solutions, treatments and vaccines to protect society against the onslaught of Covid-19. Then there was the wave of digital adoption by retail companies (AI powered or not) in an effort to provide digital, contactless access to their services, boosting consumer confidence in services and increasing usage of online ordering and contactless payments.

On the whole, trust in the technology industry remains relatively high compared to other industries, but, nevertheless, trust is being eroded and it’s not a surprise that new, less understood and less regulated technologies such as AI are fueling concerns. Fear of AI-driven job losses is a popular concern, but so are privacy, security and data issues. However, many people around the world are broadly positive about AI, in particular those in Asia. According to Pew Research Center, two thirds or more of people surveyed in India, Japan, Singapore, South Korea and Taiwan say that AI has been a good thing for society.

Since the beginning of the pandemic, AI’s public image has had wins and losses. For example, research from Amedeus found that 56% of Indians believe new technologies will boost their confidence in travel. Meanwhile, a study of National Health Service (NHS) workers in London found that although 70% believed that AI could be useful, 80% of participants believed that there could be serious privacy issues associated with its use. However, despite a relatively high level of trust in the US for government usage of facial recognition, the Black Lives Matter protests of 2020 highlighted deep concerns, prompting Amazon, IBM and Microsoft to halt the sale of facial recognition to police forces.

Overall, I don’t think that AI has been seen as the widespread buffer to the spread of Covid-19 as it, perhaps, could have turned out to be. Renowned global AI expert Kai-Fu Lee commented in a webinar last month that AI wasn’t really prepared to make the decisive difference in combating the spread of the new coronavirus. With no grand victory over Covid-19 to attribute to AI, its role over the past year it’s understandable that there was no grand victory for AI’s public image either. Meanwhile, all the inconvenient questions about AI’s future and the overall lack of clear policies that fuel concerns about AI remain, some even attracting greater attention during the pandemic.