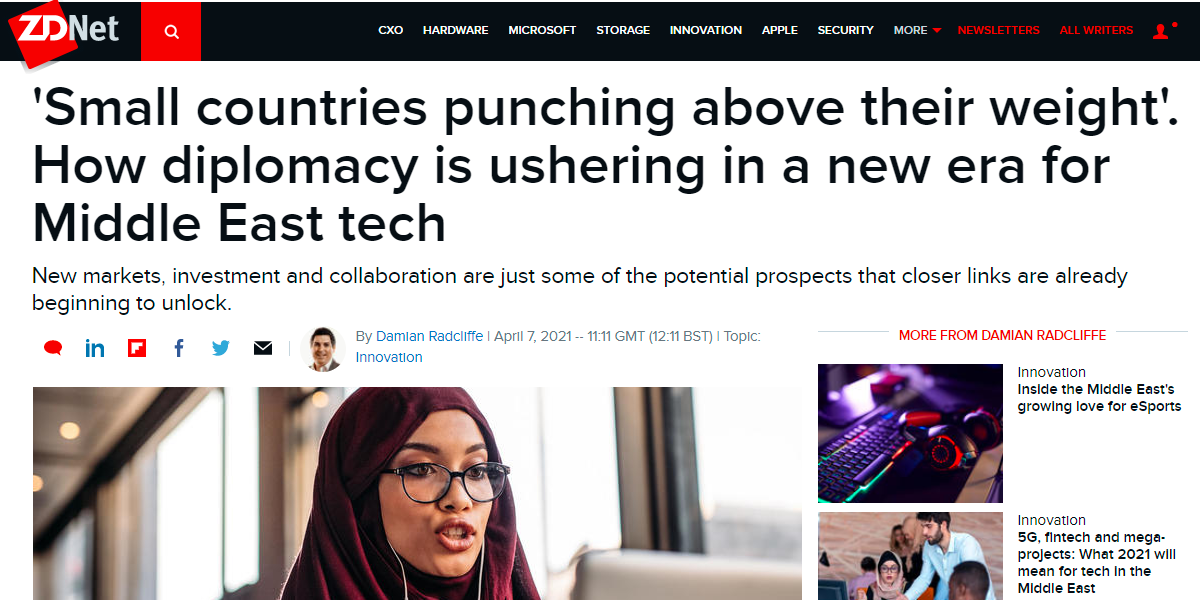 UAE innovation plans stand to gain from Israel significantly via collaborations following the historic Abraham Accords signed last year. I volunteered a few of my views on the matter to ZDNet’s Damian Radcliffe for his article on ‘how diplomacy is ushering in a new era for Middle East tech‘, which gathers opinion on the Accords impact on the technology sector from Bahrain, Israel, the United Arab Emirates and the US.

I believe that the UAE’s new relationship with Israel, offers technology sectors in both countries enormous opportunities. As the UAE continues to put in policies and incentives to encourage home-grown innovation and attract global tech talent, it can now draw on some of the resources and expertise that have helped Israel to scale its startup ecosystem. Likewise, the growing number of UAE investors interested in early-stage venture capital deals, can learn a lot from their Israeli counterparts.

From the outset, the engagement of Israeli tech firms with the UAE has been enthusiastic, to say the least. Many in the UAE’s technology industry were contacted by dozens of Israeli technology companies in the weeks following the signing of the Abraham Accords. I was personally contacted by more than a hundred members of the Israeli technology sector in the 3-4 weeks following the Accords and conducted dozens of market briefings for startups, investors and technology exporters. We’ve since seen thousands of Israelis fly to the UAE, many of them also from its tech sector and startup ecosystem, not to mention a few high profile deals.

Beyond the initial ‘gold rush’, it remains to be seen how Israeli and UAE technology sectors will invest in each other, compete against one another and collaborate together. However, overall, it seems likely that UAE innovation plans will benefit from the additional technology focus, knowledge and investment inspired by the country’s new relations with Israel.

You can read Damian’s full article on the Abraham Accords impact on the Middle East tech sector here.

previousCan the GCC leapfrog the West in AI adoption?